This article, “When An Action Item Creates History: 35 Years of the Colloquium at NASA-Langley,” appeared in the Researcher News, November 17, 2006.

After a long-standing 35 years at NASA Langley Research Center, the Colloquium Committee continues to bring in successful speakers and make history for the center. The Langley Colloquium provide monthly lectures and demonstrations related to science and technology. These lectures are intended to stimulate the creative processes of Langley employees and enhance the quality of life at Langley by providing more opportunities for learning. The lectures are open to NASA employees, NASA contractors, and other invited guests.”

The Sigma Series Lectures, presented at the Virginia Air and Space Center in downtown Hampton, provide to the general public this same opportunity for exposure to interesting technical topics. These lectures, however, are usually at a somewhat less detailed level, because the audience may consist of people with non-technical backgrounds in addition to local high school and college students.

The guests and topics for both the Colloquium and Sigma Series Lectures are selected by a committee of NASA Langley employees representing the different technical organizations at the Center.

The Colloquium committee has coordinated the Colloquium and Sigma Series for 35 years. Sheila Thibeault was named First Chairman in 1971 when she suggested the idea for a lecture series. The committee began as an “under 30 panel” of employees gathered by then center director, Ed Cortright. The lecture series was an action item that evolved from a director’s retreat which was put in place for “younger” employees to brainstorm about ways to improve the center.

Six months after the director’s meeting, Langley hosted its first Colloquium lecture: Werner von Braun speaking about “The U.S. Space Program Through the 70s.” The first series of public lectures was titled “Our Future In the Cosmos” which ran from 1974-1984. Budget cuts forced cancellation of the series to stop in 1984, but the public lectures appeared a few years later under the name of the “Sigma Series” The Sigma Series has been a successful set of lectures, to say the least, and is still going strong today.

Thibeault believes that part of the success of the Colloquium series is due to the diversity in membership on the committee. Thibeault stated, “We are a diverse group and we need to be a diverse group so that we can put together ideas for speakers and topics that will appeal to people all across the center.” She also explained, “We have always worked as a team and the work has been always enjoyable. Meeting the speakers is a real joy.” Thibeault wanted to recognize the Colloquium Secretary, Loutricia Johnson. “She has not received enough credit and thanks,” stated Thibeault. Loutricia keeps the archives and has been on the committee for many years.

Since the beginning of the Colloquium, every meeting has been a lunch meeting. Thibeault explained that, “It is more practical from the standpoint of saving time. It is service to the center, but it is not our main task. This is an extracurricular for all of us. We do this because we enjoy doing it.”

The Colloquium recently celebrated it’s 35th anniversary on October 24, 2006. Director, Lesa Roe opened the Anniversary Colloquium by stating, “If my count is accurate, today’s colloquium is number 335 in a long, successful series. Founded in 1971, this technical lecture series has explored many topics and brought to Langley, many successful speakers.”

Anniversary Colloquium speaker was NASA Administrator, Micheal Griffin. His lecture title was “Space Exporation: Filling up the Canvas.” He opened his speech by stating, “This lecture series dates back to 1971…..I started my career in the aerospace business in that same year. Maybe there is a young person in this audience who will be giving the 70th anniversary lecture on the then-future of space exploration, thirty-five years from now.”

Thibeault believes that there will be a 70th anniversary lecture and sees a bright future for the Colloquium. “I think there will always be a need for something like this. There are other lecture series, but they are specialized and focused. We try to bring things that will interest as many people as possible at the center. That is actually a challenge. There are highly specialized people that often visit and speak at LaRC, but what we try to do is get people who give technical talks that will be meaningful to the center as whole. There will always be a need for that.”

As far as committee membership is concerned, Thibeault has seen many members come and go. She is the only remaining member of the original committee. She explained, “We always have enthusiastic, hard-working committee members and when people step down, we never have a hard time getting people to step up.”

Thibeault has put 35 years of hard work and dedication into the Colloquium committee and its operations and she is proud of her part in its success. The series that began as an action item in 1971 has attracted prominent speakers to NASA-Langley, created history and continues a tradition that LaRC holds dear.

Image Below: Members of the NASA-Langley Colloquium Committee group together in the Reid Center. Credit: NASA/Jeff Caplan 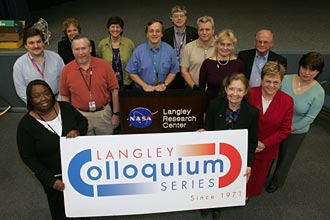 The Colloquium Committee welcomes employees’ suggestions for lecturers and/or topics. To make a suggestion, contact one of the committee members listed online.