Wings, Meatballs, Worms, and Swooshes: The Unknown Story of the NASA Seal and Insignia

Video of the presentation

The official NASA seal and the less-formal NASA insignia are among the most recognized emblems throughout the world. Virtually unknown, however, are the informative and entertaining stories of how the original emblems were conceived and developed by personnel at NASA Headquarters, the Lewis Research Center (now the Glenn Research Center), the Langley Research Center, and the Ames Research Center. The presentation summarizes recent research on the history of these activities and provides previously undocumented facts on this element of NASA’s legacy. The logos, which include symbols representing the space and aeronautics missions of NASA, were first implemented in 1959 following a NASA-wide design competition. The winning seal design was submitted by James Modarelli of the Lewis Research Center who was also tasked with designing the less-formal “Meatball” insignia. The presentation reveals previously unknown aerodynamic studies at Ames and Langley (including a secret military project) that led to the red “slash” in the logos. Humorous (sometimes embarrassing) events that occurred in the approval process are also reviewed. The adoption of a new insignia known as the NASA Logotype (irreverently known by many as the “Worm”) in 1975 and the events that resulted in it being replaced by the Meatball in 1992 are discussed. The presentation concludes with a discussion of a modern-day modification to the Meatball informally known as the “Swoosh” for applications to current NASA aircraft. 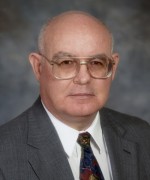 Joe Chambers retired from the NASA Langley Research Center in 1998 after a 36-year career. He began his career in 1962 in flight dynamics research at the Langley Full-Scale Tunnel. In 1974 he became the head of the Full-Scale Tunnel, the Langley 20-Foot Spin Tunnel, and related outdoor free-flight and drop-model testing. In 1989 he also became head of aircraft flight research at Langley. In 1994 he was assigned to organize and manage a new group responsible for conducting systems-level analysis of the potential payoffs of advanced aircraft concepts and technology to help guide NASA investments in aeronautical technology. He served as a representative of the United States on international committees and has given invited lectures on NASA’s aeronautics programs worldwide.

His awards include the NASA Outstanding Leadership Medal, the Exceptional Service Medal, and the Public Service Medal. He also received the coveted Arthur Flemming Award sponsored by the Washington DC Jaycees in 1975 as one of the Ten Most Outstanding Civil Servants for his management of NASA stall/spin research for military and civil aircraft. He is the author of over 50 NASA technical reports and published eight NASA books on aeronautical topics. Mr. Chambers earned a Bachelor of Science degree from Georgia Tech and a Master of Science degree from Virginia Tech.