The Recent Pause in Global Warming: A Temporary Blip or Something More Permanent?

Tuesday, August 5, 2014 at 7:30 p.m. at the Virginia Air and Space Center in downtown Hampton, Virginia. FREE (no reservations). 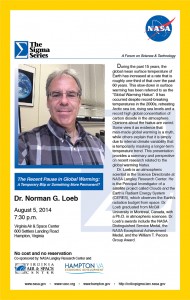 During the past 15 years, the global mean surface temperature of Earth has increased at a rate that is roughly one-third of that over the past 60 years. This slow-down in surface warming has been referred to as the “Global Warming Hiatus”. It has occurred despite record-breaking temperatures in the 2000s, retreating Arctic sea ice, rising sea levels and a record high global concentration of carbon dioxide in the atmosphere. Opinions about the hiatus are varied. Some view it as evidence that man-made global warming is a myth, while others explain that it is simply due to internal climate variability that is temporarily masking a longer-term temperature trend. This presentation provides a summary and perspective on recent research related to the global warming hiatus.

Dr. Loeb is an atmospheric scientist in the Science Directorate at NASA Langley Research Center. He is the Principal Investigator of a satellite project called Clouds and the Earth’s Radiant Energy System (CERES), which observes the Earth’s radiation budget from space. Dr. Loeb graduated from McGill University in Montreal, Canada, with a Ph.D. in atmospheric sciences. Dr. Loeb’s awards include the NASA Distinguished Service Medal, the NASA Exceptional Achievement Medal, and the William T. Pecora Group Award.

Myra Walton-Basnight is hosting our speaker this month.