Tuesday, September 10, 2013 at 7:30 p.m. at the Virginia Air and Space Center in downtown Hampton, Virginia. FREE (no reservations).

NASA has recently announced a bold, new effort known as the Asteroid Initiative, which includes the Asteroid Redirect Mission and an increased focus on defending our planet against the threat of catastrophic asteroid collisions. The two activities are mutually supportive, and NASA is pursuing them simultaneously. The current reference mission approach for the Asteroid Redirect Mission plans to capture a small asteroid, redirect it into a stable orbit in translunar space, and explore it with astronauts carried onboard the Orion spacecraft. The Asteroid Initiative will leverage NASA’s activities in human exploration, space technology, and space science in order to make progress toward a range of science, technology and human exploration goals. Mr. Mazanek will provide an overview of the Asteroid Initiative and discuss the alternate mission approach that his team is studying. 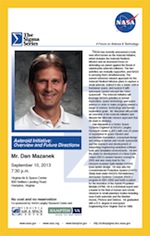 Dan Mazanek is a Senior Space Systems Engineer at NASA’s Langley Research Center (LaRC) with over 24 years of experience in space mission and architecture formulation, conceptual design and sizing of human and robotic spacecraft, and the research and development of supporting engineering analytical software tools and simulation environments. He led the study for development of a Near-Earth Object (NEO) crewed mission concept in 2005 and was study lead for the Descent-Assisted Split-Habitat (DASH) lunar lander design. He was also the Comet/Asteroid Protection System (CAPS) Study lead under NASA’s Revolutionary Aerospace Systems Concepts (RASC) program in 2001-2002 and holds a patent for the invention of the Hybrid Propellant Module (HPM). He is a technical expert and a leader in the field of human and robotic missions to small planetary bodies including near-Earth asteroids and the Martian moons, Phobos and Deimos. He graduated with a B.S. degree in Aerospace Engineering from Virginia Tech in 1989.