Take-off and Landing: It Is Important

In the 1950s and 1960s, traveling was a big “thing”. Jet travel was even a bigger “thing”. Getting to the airport was sometimes a big issue. Airports could be far away and car traffi¬c can cause delays getting to the airport. An answer to this issue is Short Take-off and Landing (STOL), Vertical Take-off and Landing (VTOL), or a combination called V/STOL. Helicopters could do that, but not fast enough. Jet aircraft with STOL, VTOL, or V/STOL could get us there quicker. Testing these kinds of aircraft needed a unique wind tunnel. The V/STOL Transition Tunnel would fill this need. The presentation will cover the description of the facility, reasons why it was built, its unique design, construction, and major events and tests from 1970 to 2020 and the future.

P. Frank Quinto’s first day at Langley Research Center was July 14, 1980, reporting to the Low-Speed Aerodynamics Branch and the V/STOL Transition Tunnel. As a graduate of Virginia Tech, with a B.S. in Aerospace and Ocean Engineering, he began a career spanning research, operations, and facility manager. He has authored or co-authored over 30 technical reports on low-speed aerodynamics of military aircraft and 14×22 operations. He served as a volunteer tour guide at Langley’s Visitors Center (1982-1990) and a docent at the Virginia Air and Space Center (1991-2020). He received numerous Center, Team and Group Achievement Awards, the Silver Snoopy Award (2016), and Outstanding Leadership Medal (2015). 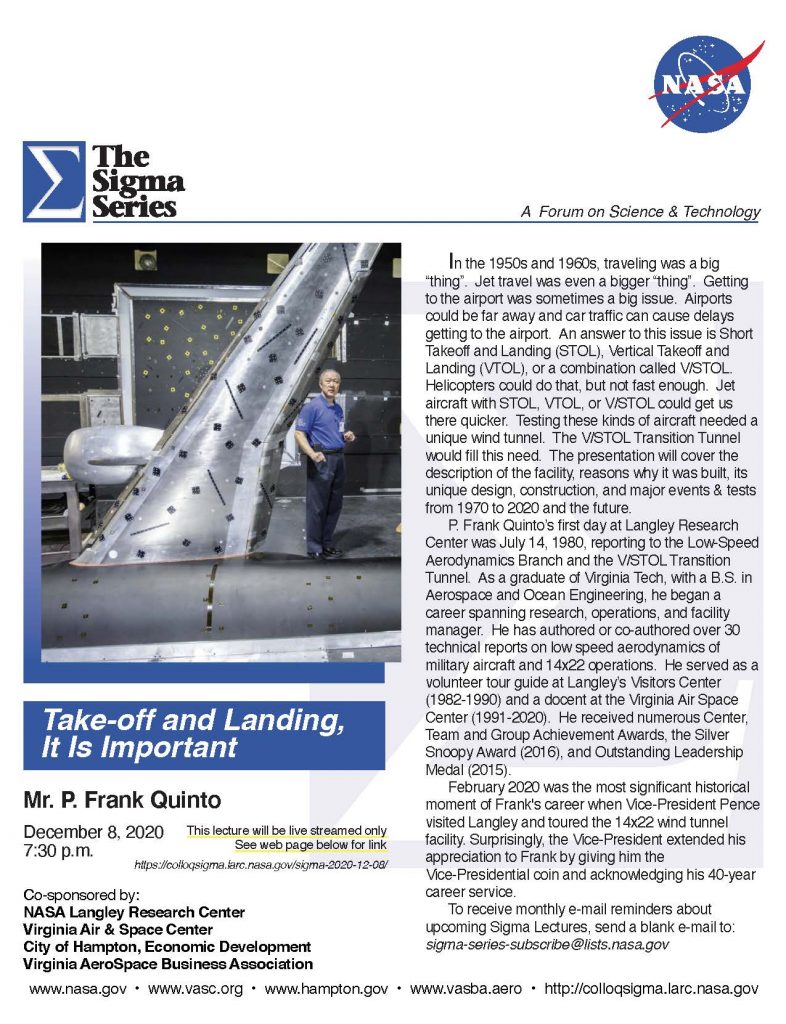